SPRINGFIELD, Mass. … The American Hockey League announced today that Bridgeport Sound Tigers defenseman Ryan Pulock has been selected as the CCM/AHL Player of the Week for the period ending Feb. 12, 2017.

On Tuesday evening, Pulock registered his first two-goal game of the season, scoring midway through the third period and then again in overtime as Bridgeport defeated Springfield, 4-3. On Friday, his goal with 5:26 remaining in regulation was the only offense in the Sound Tigers’ 1-0 win at Providence, and on Saturday night he was a plus-2, on the ice for Bridgeport’s last two goals as they rallied for a 5-4 shootout win over the Bruins. Finally, Pulock set a career high with three assists to help the Sound Tigers to a 5-4 victory over Hershey on Sunday afternoon.

Pulock has 10 goals and 12 assists for 22 points in 27 games for Bridgeport this season, and is tied for the AHL lead among defensemen with four game-winning tallies. The 22-year-old native of Dauphin, Man., was a first-round pick (15th overall) by the New York Islanders in the 2013 NHL Entry Draft and has recorded 34 goals and 42 assists for 76 points in 135 AHL games with Bridgeport, earning a spot on the AHL All-Rookie Team in 2014-15. Pulock has totaled two goals and two assists in 16 career NHL games with the Islanders, including one appearance this season.

In recognition of his achievement, Pulock will be presented with an etched crystal award prior to an upcoming Sound Tigers home game.

Ryan Pulock’s second goal of the night gives @TheSoundTigers the extra point in a 4-3 OT win over the @thunderbirdsahl. #SPRvsBRI pic.twitter.com/ySnWgHg2fM 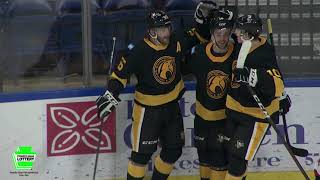