by Erica Oakley || AHL On The Beat Archive

John Anderson knows it all.  Just ask him.

The Chicago Wolves head coach has established opinions on topics like the right age to marry, the value of a dollar and the importance of independent thinking. And he’s not afraid to share those thoughts:

ON THE IMPORTANCE OF AN EDUCATION FOR A HOCKEY PLAYER

When you come out of university, you’re older, which I think makes a huge difference. You’re a little smarter, you’ve lived away from home and you’ve got your education. At 18, you’re going into an environment with guys who are millionaires and have families, and you’ve just come off the farm. You’ve barely got your driver¹s license and all of a sudden you’re with a very mature group.  They’re depending on you to make them money and when you’ve got that type of pressure in a strange environment, you¹re setting yourself up for failure.

A former player (with the Wolves) bought a brand new Cadillac Escalade and wanted to sell it right away. He then bought a Mercedes 55 AMG. He’s got this $60,000 Cadillac that he sells for $30,000 and then he buys a $70,000 Mercedes. It’s a beautiful car, don’t get me wrong, but why? I’ve done that, I’ve made all those mistakes. You don’t need to buy another car; it’s just a piece of metal that gets you from point A to point B.

I always tell the players and my own kids: don’t get married until you’re at least 30. They come out of college when they’re in their early 20’s and a lot of them don’t know (stuff) from wild honey. Before they get their career started and they get a little money, they’re getting married.  Maybe the girl is trying to get her career on track and he brings her from Timbuktu and they’re in a city they don’t know and they’re all over the place. Usually by 30 you kind of know what you want in life.

ON HOCKEY PLAYERS THINKING FOR THEMSELVES

I remember we (the Toronto Maple Leafs) were traveling and we were in the Denver airport. Darryl Sittler grabs me and says, "Watch this; just follow me." We start to walk in a big circle, and he says, "Watch; everybody will follow us because these people are sheep. They don’t know that we’re going in circles." Sure enough, the whole team follows us in a big circle and he’s laughing like crazy. We (hockey players) don’t do things on our own. We don’t book our own flights or hotel rooms. We have no idea about the cost of things. Those are the things I want them to be a little more independent about.

ON A CAREER AFTER HOCKEY

The hardest thing when you leave hockey is figuring out what you want to do next.  I think during the summertime, ­ although it’s really hard, they should take some type of part-time job to see what the outside world is really like. A part-time summer job could open up a myriad of things. A lot of guys who retire are like, "What do you mean I have to be at work at eight o’clock in the morning?" It’s very difficult; that transition is tough. We like to get them active in the community representing the Wolves and meeting people to help them when their career is over.

ON THE SIMILARITIES BETWEEN HOCKEY AND LIFE

Life is very difficult. It’s hard and you can’t sit back and rest on your laurels. You’ve always got to push forward.  I think persevering and being upbeat is absolutely the key to be successful at anything. You can have a bad day, but you can’t let that bad day turn into 10 bad days. You push on and get going again. A hockey game is a fleeting moment and so is life.

California dreamin’ about an NHL future

‘It takes a big person to realize they need help’

theahl
•
Follow
With a hat trick last night in #TUCvsONT, Martin Frk maintains his position as the leading goal-scorer for @ontarioreignhockey.
View on Instagram |
3/9

theahl
•
Follow
Jeremy Gregoire finds the back of the net to give @txstarshockey a 2-1 lead in #TEXvsRFD.
View on Instagram |
6/9 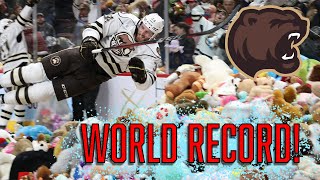