Hershey forward Keith Aucoin needed just 4:31 of action on Saturday against Norfolk to seal his place in AHL history. Entering two points shy of 500 for his AHL career, Aucoin posted a goal and an assist in the early stages to become the 74th AHL player to reach the milestone, and the second in an eight-day span.

Aucoin added another goal in the third period and now shows 153 goals and 348 assists in 488 career AHL games, and he joins Grand Rapids’ Darren Haydar in reaching the league’s 500-point club this season. Haydar earned the honor on Feb. 7 vs. Lake Erie.

A native of Waltham, Mass., Aucoin began his AHL career by registering 16 points in 30 games for the Lowell Lock Monsters during the 2001-02 campaign.

He moved to Providence for his first full AHL season in 2002-03 and led the Bruins with 74 points, including his first of four 20-goal seasons in the AHL.

Aucoin put up 48 more points for Cincinnati the following season before returning to Providence in 2004-05, when he racked up 66 points in 72 regular-season games and added 18 points in 17 playoff tilts as the B’s reached the Eastern Conference Finals.

Aucoin joined the Carolina Hurricanes organization for 2005-06 and registered 85 points for Lowell, including a career-high 29 goals, en route to the first of two consecutive Second Team AHL All-Star selections.

He moved with the Hurricanes’ affiliation to Albany in 2006-07 and set a career high with 99 points (27-72-99), tied for the second-most in the AHL that season. Aucoin tallied 45 more points in 38 games for the River Rats last season before earning a recall to Carolina, for whom he netted his first five career NHL goals and added eight assists in 38 tilts.

The 30-year-old Aucoin currently leads the entire AHL in scoring with 68 points (19-49-68) in 53 games for the Bears this season, and last month he made his fourth consecutive appearance at the AHL All-Star Classic. 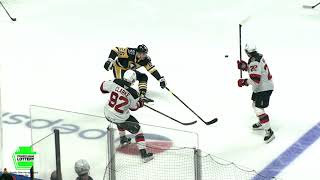