SPRINGFIELD, Mass. … The American Hockey League announced today that left wing Donald MacLean of the Grand Rapids Griffins has been named the winner of the Les Cunningham Award as the AHL’s most valuable player for the 2005-06 season, as voted by players and members of the media in each of the league’s 27 cities.

Named a 2005-06 First Team AHL All-Star last week, MacLean has torn up the American Hockey League for 56 goals this season, tied for the eighth-highest total in the league’s 70-year history. His 88 points are good for fourth in the league scoring race, and he is the top sniper on a Griffins team that leads the AHL in wins (54), points (113) and offense, averaging 4.05 goals per game.

MacLean recorded a point in 19 straight games from Jan. 6 through Feb. 18, the longest such streak in the league this year, and his five hat tricks are the most by an AHL player in one season since 2000. He participated in the 2006 Rbk Hockey AHL All-Star Classic, winning the Hardest Shot event at the annual Skills Competition and scoring two goals for the Canadian squad in the All-Star Game.

A native of Sydney, N.S., MacLean was recalled by the parent Detroit Red Wings earlier this week, and scored the game-winning goal in his NHL season debut, a 2-0 victory over Edmonton on Tuesday. In 447 career AHL games, MacLean, who won the AHL scoring title in 2001-02, has recorded 190 goals and 218 assists for 408 points. He’s added seven goals and four assists in 31 career NHL contests.

In operation since 1936, the AHL is celebrating its historic 70th anniversary this season, and continues to serve as the top development league for all 30 National Hockey League teams. Over 80 percent of all NHL players today are AHL graduates, and more than 350 AHL players have been recalled to the NHL this season alone. Sixteen clubs will continue to vie for the league’s coveted championship trophy when the 2006 Calder Cup Playoffs get underway next week. 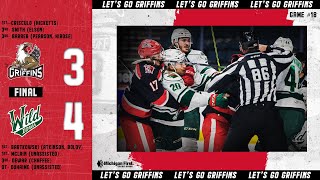