Gerald Mayhew continued his torrid postseason with two more goals and Iowa evened the Central Division Finals at two games apiece with a 2-1 win over Chicago in Game 4 on Wednesday night.

The Wild host Game 5 on Friday before the series heads back to Chicago for Games 6 and, if necessary, 7.

Mayhew opened the scoring with 6:59 left in the first period, skating down the right wing, driving to the net and slipping a shot past Oscar Dansk.

Iowa doubled its lead 5:25 into the third period when Mayhew found a loose puck in front and scored to make it 2-0. The second-year pro out of Ferris State University now has nine goals in nine playoff games, including five in this series.

Chicago finally got on the board when Curtis McKenzie scored with 10:49 to go, ending Andrew Hammond‘s shutout streak at 141:08.

Hammond (5-4) finished with 33 saves on the night as the Wild improved to 4-0 at home in the playoffs. They have outscored their opponents 17-2 at Wells Fargo Arena in the postseason. 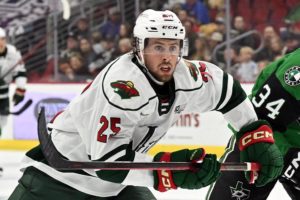