TORONTO 6, ABBOTSFORD 0
Rookie forward Marcel Mueller notched a hat trick and added two assists for a five-point afternoon as Toronto wrapped up its season with a dominating 6-0 victory over visiting Abbotsford on Sunday at Ricoh Coliseum.

It marked the second hat trick of the season for Mueller, who also scored three times back on Dec. 11 at Lake Erie. Muller recorded five goals and eight points in his first three games back in the Marlies’ lineup this week following a 16-game absence.

The native of Germany finished his rookie campaign with 33 points (14-19-33) in 57 AHL games while also appearing in his first three career NHL tilts with the Maple Leafs.

Justin Hodgman complemented Muller with a goal and two assists in the win; Greg McKegg potted his first professional goal; and defenseman Josh Engel also found the back of the net.

Toronto went 4-for-4 on the power play after entering the day with the AHL’s 27th-ranked man-advantage unit for the season (14.0 percent).

Greg Scott contributed a pair of assists for Toronto, and goaltender Jussi Rynnas pitched a 25-save shutout in just his second game back following a lengthy injury absence.

The Heat concluded their season with back-to-back shutouts against, having suffered a 3-0 setback at Lake Erie on Saturday.

WILKES-BARRE/SCRANTON 4, ADIRONDACK 2
Wilkes-Barre/Scranton wrapped up its most impressive regular season in the franchise’s 12-year history on Sunday with a 4-2 win over visiting Adirondack in front of 7,161 fans at Mohegan Sun Arena.

Before the game, the league recognized AHL goaltender of the year Brad Thiessen and coach of the year John Hynes. And afterwards, the Pens’ goaltending duo of Thiessen and John Curry clinched the Harry “Hap Holmes” Award by virtue of allowing the fewest goals of any AHL team this season.

Nick Petersen scored twice and Chris Collins and Ryan Schnell once apiece for the Penguins, who had to rally for three third-period goals to take the victory in this one. Thiessen earned the victory after making 23 saves and ended 35-8-1 in 46 appearances this season.

The Penguins will take on Norfolk in the first round of the Calder Cup Playoffs, beginning next Friday and Saturday in Wilkes-Barre.

SPRINGFIELD 2, PORTLAND 1 (OT)
Former first-round draft pick Nikita Filatov lit the lamp 3:05 into overtime as Springfield concluded its season on a high note with a 2-1 road win over Atlantic Division-champion Portland on Sunday at the Cumberland County Civic Center.

The Falcons finished 5-3-0-0 in their final eight games but will miss the postseason for an eighth consecutive season.

Rookie defensemen John Moore and David Savard picked up assists on the game-winner by Filatov, which was the 20-year-old’s ninth goal of the campaign.

After a scoreless opening period, Jacob Legace gave the Pirates a 1-0 lead at 3:39 of the second frame. Springfield rookie forward Tomas Kubalik’s 24th goal of the season tied it up 5:41 into the third period.

Falcons rookie goaltender Paul Dainton, who recently completed his senior season at UMass-Amherst, earned the victory with 17 saves in net.

PROVIDENCE 3, MANCHESTER 2
Providence struck for three goals in the first period and then held on for a 3-2 triumph over visiting Manchester on Sunday before a crowd of 9,550 fans at the Dunkin’ Donuts Center.

Defenseman Yury Alexandrov began the Bruins’ onslaught 4:07 into the game, and rookie Ryan Spooner followed at 9:42 with his second goal in as many nights. Fellow rookie Carter Camper then notched his first professional goal at the 13:20 mark.

The Monarchs clawed back into the game, as former second-round draft pick Tyler Toffoli netted his first pro goal in the second period and 2011 Second Team AHL All-Star Viatcheslav Voynov made it 3-2 midway through the third.

But Manchester was unable to get the equalizer and wound up the regular season at 44-26-4-5 (98 points). The Monarchs will battle Binghamton in the first round of the playoffs, beginning on Thursday in Manchester.

Goaltender Anton Khudobin stopped 41 of 43 shots between the pipes for the Bruins, who will miss the playoffs for a second consecutive season following a run of 11 consecutive qualifications.

NORFOLK 6, CONNECTICUT 3
Paul Szczechura netted a pair of goals and Mattias Ritola racked up a game-high three points (1-2-3) as Norfolk clinched fourth place in the East Division on Sunday with a 6-3 road win over Connecticut at the XL Center in its regular-season finale.

The Admirals, back in the Calder Cup Playoffs following a three-year absence, will take on AHL regular-season champion Wilkes-Barre/Scranton in the East Division semifinals. Games 1 and 2 will be next Friday and Saturday in Wilkes-Barre.

Marc-Antoine Pouliot and Blair Jones posted a goal and an assist apiece for the Admirals, and Mike Angelidis rounded out the offense. Norfolk took control courtesy of a three-goal opening period in which it outshot Connecticut by a whopping 20-4 margin.

Admirals goaltender Jaroslav Janus earned the win in net with 17 saves on 20 shots, as Norfolk concluded its season-ending road trip at an even 2-2-1-0.

SYRACUSE 4, HERSHEY 1
Rookie Peter Holland tallied a pair of goals to lead Syracuse to a season-ending 4-1 road win over two-time defending Calder Cup champion Hershey on Sunday in front of 10,435 fans at the Giant Center.

Holland, a first-round draft pick by Anaheim in 2009 who joined the Crunch following an 88-point junior season at Guelph (OHL), registered three goals and six points in just three games with Syracuse at the tail end of the year.

Goaltender Timo Pielmeier secured the win with 22 saves for the Crunch, who endured a tough season but ended it by posting an impressive 15-5-0-0 record in their final 20 games.

Andrew Gordon notched the lone goal for the Bears, who will open their Calder Cup title defense on home ice Thursday night against Charlotte.

HOUSTON 6, OKLAHOMA CITY 3
Houston scored on four of its 12 shots in the second period and doubled up visiting Oklahoma City by a 6-3 count on Sunday before 11,519 fans at the Toyota Center in both teams’ regular-season finale.

Warren Peters led the way with two goals and an assist for the Aeros, who were playing their first game since Apr. 2 following an unusual seven-day hiatus.

Chad Rau and Patrick O’Sullivan each contributed a goal and a helper in the winning effort, while Jed Ortmeyer and defenseman Cody Almond rounded out the offense. Robbie Earl put up a trip of assists.

Houston rookie goaltender Matt Hackett stopped 30 of 33 shots between the pipes, finishing his regular season at 23-16-4 in 45 appearances.

The Aeros will take on Peoria in the opening round of the Calder Cup Playoffs beginning on Wednesday in Houston.

Philippe Cornet and Colin McDonald each registered a goal and two assists for the Barons, and McDonald’s third-period goal was his 41st goal of the campaign, earning him the Willie Marshall Award as the AHL’s top goal-scorer for 2010-11.

Oklahoma City Rookie Mark Arcobello recorded a goal and a helper in the losing effort, as the Barons will now turn their attention to the Calder Cup Playoffs and first-round opponent Hamilton.

LAKE ERIE 5, ROCHESTER 4 (SO)
Lake Erie coughed up a three-goal lead in the third period but eventually collected a 5-4 road win over Rochester on Sunday at the Blue Cross Arena.

The Monsters carried a 4-1 lead into the final 20 minutes on the strength of goals by Matthew Ford, Maury Edwards, Curtis Fraser, and Ben Walter, with Edwards scoring his first as a professional.

But the Amerks sprung to life in the third period, as defenseman Clay Wilson scored twice and fellow rearguard Mike Kostka once to make it a 4-4 game. Wilson’s game-tying tally came unassisted with just one minute left in regulation.

The Americans ultimately came up short and ended the season on a five-game winless skid (0-3-1-1). Rochester missed the playoffs for the third time in the last four seasons.

Lake Erie, meanwhile, is making its first-ever postseason appearance and kicks off the first round with a Saturday afternoon matinee tilt against Manitoba.

SAN ANTONIO 1, TEXAS 0
Viktor Tikhonov tallied the game’s lone goal at 6:06 of the first period, and goaltender Joe Fallon made that stand up as San Antonio earned a 1-0 win over visiting Texas on Sunday before 9,909 fans at the AT&T Center.

A former first-round draft pick, Tikhonov notched his 10th goal of the season and was assisted on the play by Ned Lukacevic and defenseman Nick Ross.

Fallon made 27 saves in net to record his first AHL shutout of the campaign, stopping six shots in the first period, 12 in the second frame, and nine more in the third.

The loss slid Texas to fourth place in the West Division standings and earned the Stars a ticket to Milwaukee for a first-round playoff match-up with the division-champion Admirals.

The Stars suffered back-to-back shutouts to conclude their regular season, having dropped a 2-0 decision to Oklahoma City on Saturday.

MILWAUKEE 4, GRAND RAPIDS 1
Rookie Cory Conacher tallied a pair of power play goals – including the eventual game-winner – as West Division champion Milwaukee wrapped up its regular-season slate with a 4-1 win over visiting Grand Rapids on Sunday at the Bradley Center.

The Admirals will begin their Calder Cup quest on Thursday with an opening-round match-up against defending conference champion Texas.

Andreas Thuresson earned an assist on both goals by Conacher, who finished with four goals and two assists in just five regular-season games with Milwaukee after coming aboard from Canisius College.

Ryan Thang and defenseman Brett Palin (1-1-2) chipped in a goal apiece in the win, the latter scoring into an empty net in the game’s closing seconds. Goaltender Atte Engren earned the victory with 36 saves on 37 shots between the pipes.

Chris Minard scored the only goal for the Griffins, who missed the playoffs for the third time in the last four seasons.

BRIDGEPORT 4, ALBANY 3
Rookie Tyler McNeely completed an impressive 10-game stint with Bridgeport by posting a goal and two assists as the Sound Tigers wrapped up their season with a 4-3 win over visiting Albany on Sunday at Webster Bank Arena.

McNeely, who joined Bridgeport after a four-year career at Northeastern University, wound up with 11 points (5-6-11) in his 10 games with the Sound Tigers and ended the year with five points (2-3-5) in his last two contests.

Rookie Matt Donovan notched his first professional goal and added an assist for the Sound Tigers, while Rob Hisey and Jeremy Colliton rounded out the offense.

Bridgeport goaltender Mikko Koskinen secured the victory with 46 saves on 49 shots in net. The Sound Tigers will miss the Calder Cup Playoffs for the first time since 2008.

Chad Wiseman and Pierre-Luc Letourneau-Leblond registered power play goals for the Devils, and Brad Mills scored at even strength. Albany ended its campaign.

ROCKFORD 5, CHICAGO 4 (OT)
Jeff Taffe picked a dramatic moment to reach the 30-goal plateau for the first time in his nine-year professional career, scoring at 3:33 of overtime as Rockford rallied past host Chicago by a 5-4 count on Sunday in both teams’ season finales.

Attendance at Allstate Arena was 10,091.

Taffe, who added an assist in the winning effort, wrapped up the season as the IceHogs’ leading scorer with the 30 goals and 37 helpers for 67 points in 74 games.

Rookie forward David Gilbert netted his first two professional goals for Rockford, the latter of which sparked the IceHogs’ rally from a 4-1 third-period deficit. After Gilbert connected on the power play at 3:19, Rob Klinkhammer (13:49) and Mathis Olimb (19:21) followed to send the game to overtime.

Klinkhammer (1-2-3) and defenseman Ryan Stanton assisted on the game-winner by Taffe, and goaltender Hannu Toivonen (21-16-4) earned the victory in net with 37 saves on 41 shots.

The Wolves, who will miss the playoffs for the second time in three seasons since capturing the 2008 Calder Cup title, received goals from Riley Holzapfel, Mark Matheson, Fredrik Pettersson, and Tim Miller. Jason Krog chipped in two assists in the losing effort. 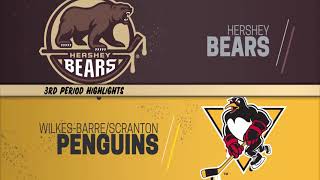